Did I Just Break My Penis? (Possibly) Penile Fractures

Penile fractures… and "sensitive" questions around the old bait and tackle.

Have you ever broken a bone?

What about the bone? Is that even possible? Any man who claims not to have pondered this question is probably lying.

Well, ponder no longer. It is, in fact, possible to “break” your penis.

What is a Penile Fracture?

Penile fractures can occur when an erect penis is suddenly or forcefully bent. Usually, this can occur during sex or a particularly rough session of self-love.

A penile fracture may be the official name for the condition that manifests with a loud pop and immediate, intense pain, but it differs from other fractures in one key way: there are obviously no actual bones in the penis.

According to the Mayo Clinic, a penile fracture is characterized by a rupture to the surface of one or both corpora cavernosa, the cylindrical structures within the penis that fill with blood during arousal to produce an erection. The result can be a popping sound, pain, swelling, and a purple-looking penis due to bleeding underneath the skin. Kind of like an eggplant – eggplant emoji, anyone?

Severe penile fractures are rare, but trauma to the penis, including painful bends, is the more common injury reported during sex. Needless to say, an actual fracture requires immediate medical attention. If left untreated, it could lead to pronounced curvature, disfigurement, or the permanent inability to achieve or maintain an erection. Oh snap.

Be careful out there, gentlemen.

The headline-grabbing nature of a broken d*ck aside, there are injuries to your crown jewels that are more common and potentially more serious that you need to be aware of. More often, these affect the testicles.

Testicular torsion happens when a testicle rotates inside the scrotum, twisting the spermatic cord and cutting off the gonad’s blood supply. The condition is extremely painful and actually requires immediate emergency surgery to fix.

If a testicle is starved of blood, and thus, oxygen, for too long, it can be so badly damaged that it needs to be removed altogether. Most men prefer to avoid this outcome.

While testicular torsion tends to be more common for young men between the ages of 12 and 18, it can happen at any age and even before birth. It can occur several hours after vigorous activity, following a minor injury to the testicles, or even during sleep.

It's not entirely clear what makes some men more susceptible to testicular torsion. Some who experience it have an inherited trait that makes it easier for the testicle to rotate freely inside the scrotum. While not every male who has this trait will experience testicular torsion, the only surefire way to prevent it is with surgery that attaches the testicle to the scrotal wall.

Another rare condition, an ascended testicle, is pretty much exactly what it sounds like: a testicle (or two, if you’re really unlucky) that goes up to where it originally came from – up, out of the scrotum, back into the groin.

The testes form inside the peritoneum during male fetal development and later descend through the abdominal wall, the groin, and then down into the scrotum. Most baby boys enter the world with testicles fully descended at birth. According to a study by the National Institutes of Health (NIH), only about 0.8 percent of boys have undescended testes by one year of age.

A small number of boys have what is described as a retractile testicle, where a testis or two can migrate up and down between the scrotum and the groin. Often, the wandering gonad can be moved by hand back into the scrotum, where it will stay, at least temporarily.

This condition is mainly benign, but it does carry with it the risk of developing an ascending testicle – or, in the clear medical language we all know and love, an “acquired undescended testicle.” In such cases, the testis climbs back up into the groin and stays put, requiring a surgical procedure to attach it to the scrotal wall, similar to the treatment for testicular torsion.

It’s an overactive muscle that often leads to retractile and ascending testicles, and it’s largely a hereditary genetic trait. The good news is, if you’re reading this now and you never had any issues with late or undescended testicles, you probably don’t have to worry about this one.

Pain, Lumps, and Other Ball-Related Maladies

Rare big-ticket genital mishaps aside, all men are at risk of other potentially harmful testicular conditions that are often less obvious.

The testicles are notoriously sensitive organs, and when something’s wrong, you’ll typically know about it right away. We’ve all suffered through the lingering agony of the classic nut shot, but if the pain just doesn’t go away – or if swelling and discomfort appear without an obvious interaction with a foreign knee, foot, or piece of sports equipment, don’t just wait around for it to resolve.

Sometimes it can be a simple case of epididymitis –inflammation of the epididymis (where sperm matures before traveling through the vas deferens), which sits behind the testicle. With just a thin lining for protection, the epididymis is at higher risk for infection or injury than other parts of the scrotum.

But that pain and swelling could indicate a more serious infection or problem – so don’t risk it.

When to see a urologist?

Make an appointment with a urologist for a proper diagnosis. Dr. Philip Cheng, Peak’s lead provider, is a board-certified urologist who provides the full spectrum of care to patients, from diagnosis to treatment.

And the same goes for any lumps you might find when checking your balls – you’re checking regularly, right? Good. Even small, smooth, and painless bumps could be an issue down the line. Testicular cancers, when caught early, can often be cured, so make sure you’ve got your hands on your balls often.

It can’t be emphasized enough – feel yourself up in the shower on a regular basis. Keep an eye out for bumps, lumps, swelling, or pain that shouldn’t be there, and talk to a urologist if something doesn’t feel right. Chances are, it’s no big deal, but you want to be sure.

Take care of your man parts, and they will take care of you. Watching someone get kicked in the balls may be hilarious, but you won’t be laughing when it’s you. That’s what YouTube is for. 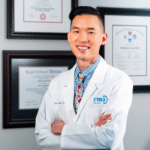